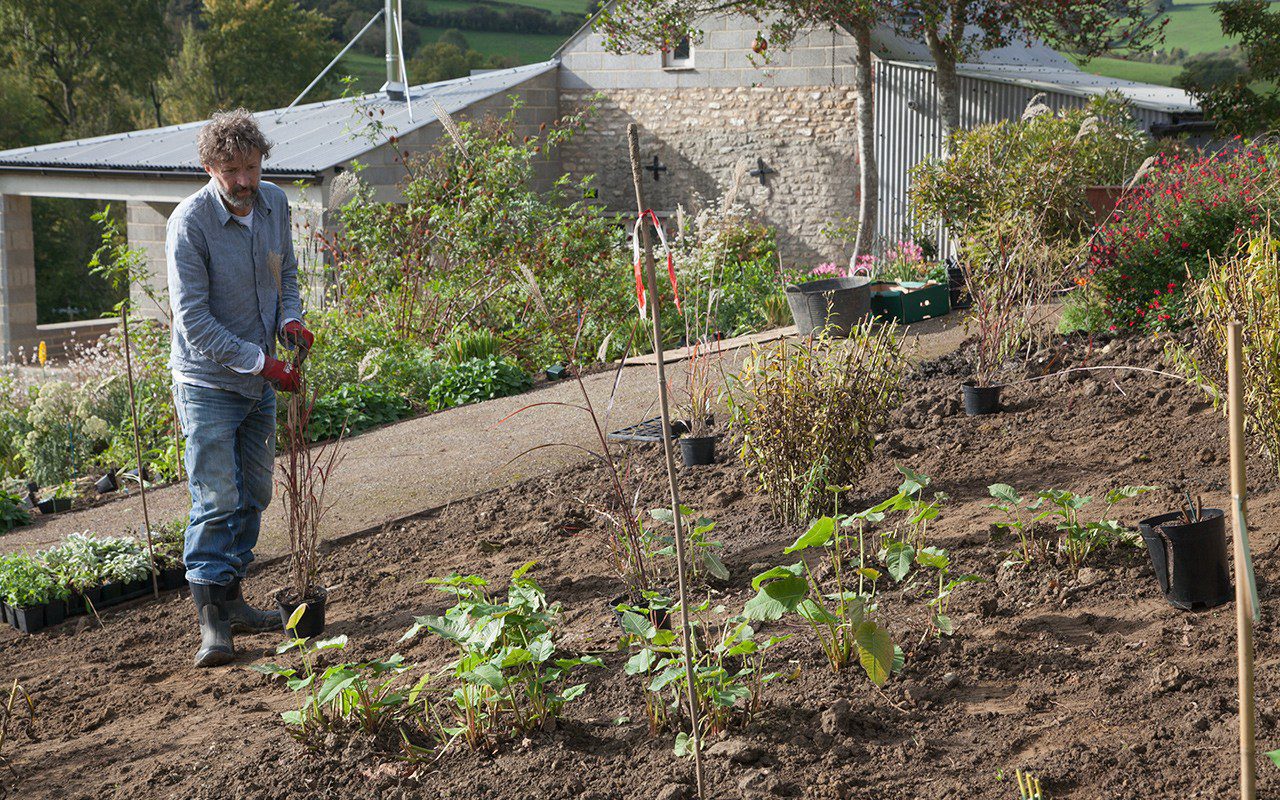 Sandwiched between storms and West Country wet, a miraculous week fell upon the final round of planting. We’d been lucky, with the ground dry enough to work and yet moist enough to settle the final splits from the stock beds. It took two days to lay out the plants and then two more to plant them and the weather held. Still, warm and gentle.

I’ve been planning for this moment for some time. Years in fact, when I consider the plants that I earmarked and brought here from our Peckham garden. They came with the promise and history of a home beyond the holding ground of the stock beds, and now they are finally bedded in with new companions. There are partnerships that I have been long planning for too but, as is the way (and the joy) of setting out a garden for yourself, there are always spontaneous and unplanned for juxtapositions in the moment of placing the plants.

The autumn plant order was roughly half that of the spring delivery, but the layout has taken just as much thought in the planning. I did not have a formal plan in March, just lists of plants zoned into areas and an idea in my head as to the various combinations and moods. It was the same this autumn, but forward thinking was essential for the combinations to come together easily on the day. Numbers for the remaining beds were calculated with about a foot between plants. I then spent August refining my wishlist to edit it back and keep the mood of the garden cohesive. The lower wrap, with its gauzy fray into the landscape, allows me to concentrate an area of greater intensity in the centre of the garden. The top bed that completes the frame to this central area and runs along the grassy walk at the base of the hedge along the lane, was kept deliberately simple to allow the core of the garden its dynamism. The zoning plan for the central section of the garden The top of the central bed The end of the central bed The middle of the top bed The end of the top bed

My autumn list was driven by a desire to bring brighter, more eye-catching colour closer to the buildings, thereby allowing the softer, moodier colour beyond to recede and diminish the feeling of a boundary. The ox-blood red Paeonia delavayi that were moved from the stock beds in the spring and now form a gateway to the garden, were central to the colour choices here. They set the base note for the heat of intense, vibrant reds and deep, hot pinks including Hemerocallis ‘Stafford’, Crocosmia ‘Hellfire’ and Salvia ‘Jezebel’ on the upper reaches. The yolky Kniphofia ‘Minister Verschuur’, lime-green euphorbias and the primrose yellow of Hemerocallis altissima drove the palette in the centre of the garden. Once you have your palette in list form, it is then possible to break it down again into groups of plants that will come together in association. Sometimes the groups have common elements like the Panicum virgatum ‘Shenandoah’, which link the new beds to the ones below them.  Although I don’t want the garden to be dominated by grasses, they make a link to the backdrop of the meadows and the ditch. They are also important because they harness the wind which moves up and down the valley, catching this unseen element best. Each variety has its own particular movement; the Molinia caerulea ‘Transparent’, tall and isolated and waving above the rest, registers differently from the moody mass of the ‘Shenandoah’, which run beneath as an undercurrent.

To play up the scale in the top bed, so that you feel dwarfed in the autumn as you walk the grassy path, I have planned for a dramatic, staggered grouping of Panicum virgatum ‘Cloud Nine’. They will help to hold the eye mid-way so the planting is revealed in chapters before and then after. This lofty grass with its blue-grey cast will also separate the red and pink section from the violets and blues that pick up in the lower parts of the walk to link with the planting beyond that was planted in the spring. These dividers, or palette cleansers, are important, for they allow you to stop one mood and start another without it jarring. One combination of plants can pick up and contrast with the next without confusion and allow you to keep the varieties in your plant list up for interest and diversity, without feeling busy.

Each combination within the planting has its own mood or use. Spring-flowering tellima and pulmonaria will drop back to ground-cover after the mulberry comes into leaf and the garden rises up around it. Aster ericoides ‘Pink Cloud’ and Schizostylis coccinea ‘Major’ beneath the Paeonia delavayi for late season colour and interest. The associations that are designed to jump the path from one side to the other in order to bring the plantings together are key to cohesiveness. The sunny side of the path favours the plants in the mix that like exposure, the shady side, those that prefer the cool, and so I have had to be aware of selecting plants that can cope with these differing conditions. Consequently, I have included plants such as Eurybia divaricata that can cope with sun or shade, to bring unity across the beds. The taller groupings, which I want to feel airy in order to create a feeling of space and the opportunity of movement, always have a number of lower plants deep in their midst so that there is room and breathing space beneath. Sometimes these are plants from the edge plantings such as Calamintha sylvatica ‘Menthe’, or a simple drift of Persicaria amplexicaulis ‘Blackfield’, which sweeps through the tall tabletop asters (Aster umbellatus). This undercurrent of the adaptable persicaria, happy in sun or shade, maintains a fluidity and movement in the planting. The combinations, sixteen in total, were then focused by zoning them on a plan. The plan allowed me to group the plants by zone in the correct numbers along the paths for ease of placement. Marking out key accent plants like the Panicum ‘Cloud Nine’, Glycyrrhiza yunnanensis, Hemerocallis altissima and the kniphofia were the first step in the laying out process. Once the emergent plants were placed, I follow through with the mid-level plants that will pull the spaces together. The grasses, for instance, and in the central bed a mass of Euphorbia ceratocarpa. This is a brilliant semi-shrubby euphorbia that will provide an acid-green hum in the centre of the garden and an open cage of growth within which I can suspend colour. The luminous pillar-box red of Potentilla ‘Gibson’s Scarlet’ and starry, white Dahlia merckii ‘Alba’. Short-lived Digitalis ferruginea were added last to create a level change with their rust-brown spires. However, I am under no illusion that they will stay where I have put them. Digitalis have a way of finding their own place, which isn’t always where you want them and, when they re-seed, I fully expect them to make their way to the edges, or even into the gravel of the paths. Over the summer, I have been producing my own plants from seed and it has been good to feel uninhibited with a couple of hundred Bupleurum longifolium ‘Bronze Form’ at my disposal to plug any gaps that the more calculated plans didn’t account for. Though I am careful not to introduce plants that will self-seed and become a problem on our hearty soil, a few well-chosen colonisers are always welcome for they ensure that the garden evolves and develops its own balance. I’ve also raised Aquilegia longissima and the dark-flowered Aquilegia atrata in number to give the new planting a lived-in feeling in its first year. Aquilegia downy mildew is now a serious problem, but by growing from seed I hope to avoid an accidental introduction from nursery-grown stock. The columbines are drifted to either side of the path through the blood-red tree peonies and my own seed-raised Hesperis matronalis var. albiflora. For now they will provide me with an early fix. Something to kick-start the new planting and then to find their own place as the garden acquires its balance.