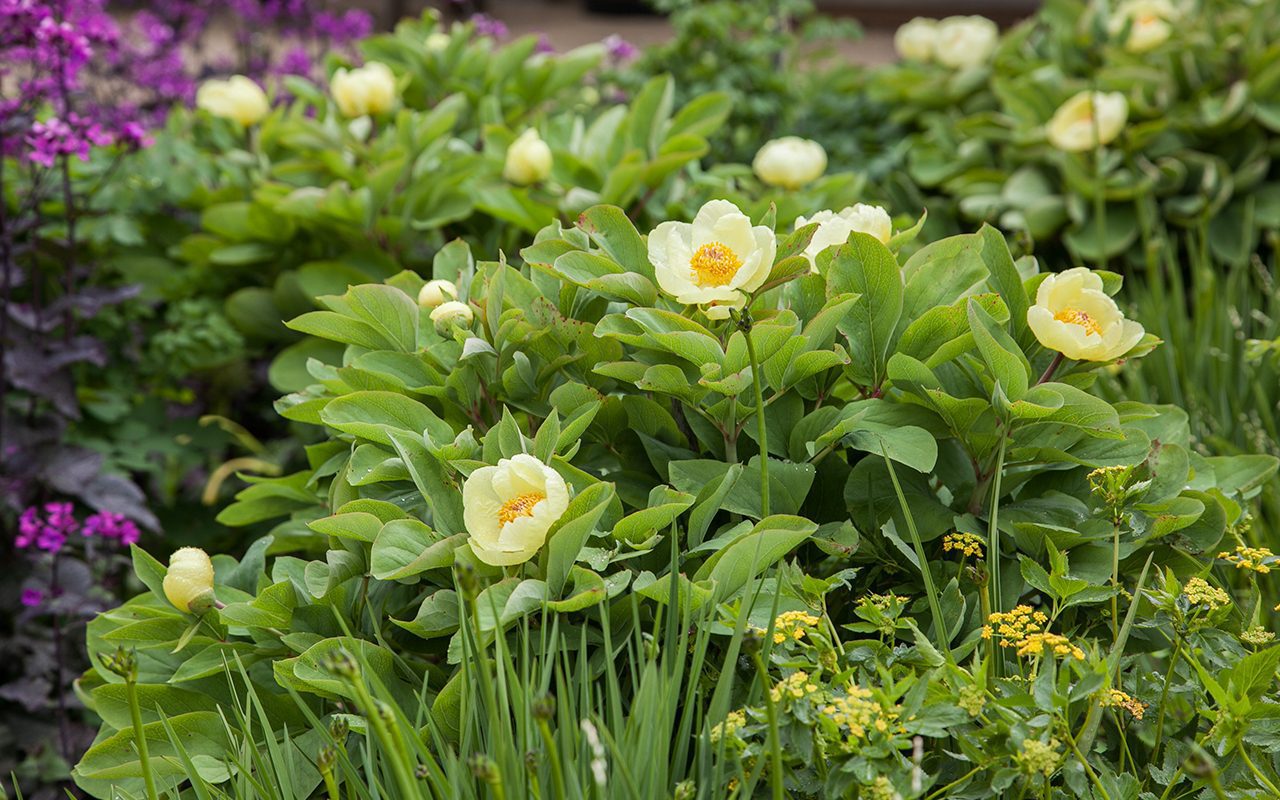 Molly is having a moment. One that has been building in anticipation since the shoots rudely broke ground at the end of winter. Lipstick-pink sheaths, bright as forced rhubarb, then smoky growth with its downy bloom like plums. Fists clenched and reaching fast in March letting you know that they are on the move, then expanding to take the early sunshine.  As the buds become visible, the foliage, now apple green and glaucous, fills to form a ruff around fattening buds. Another fortnight, which tracks the plum blossom coming and going, hedgerows flushing green and the cow parsley rising to first flower, sees the buds plumping and expanding to the first glimpse of yellow. You watch daily at this point, returning again and again in the vigil for first flower. A journey that has marked the progress of spring.

This year, they came at the end of a glorious ten days of sunshine that has seen our slopes crisp with frost in the morning, then baking, the ground opening up and cracking, so that we worried for lack of rain. It is typical of April, this changeable month, but the Paeonia mlokosewitchii are dependable timekeepers. Setting their path towards a glorious week of flower – ten days if you are lucky – then gone as the garden rises around them and your attention is drawn elsewhere.

It takes time to build a good plant, for ‘Molly the Witch’ is slow and measured in her progress. Fortunately she is reliable if you find the right position and will survive for decades with no fuss. Growing in the wild in the Caucasus between the Black and the Caspian Seas, Paeonia mlokosewitchii favours rocky slopes in woods of oak and hornbeam, sometimes beech. I’d love to see them there and imagine that they must find the glades where early light penetrates and where they occupy the good ground away from too much root competition.

My eldest plants here are now about twenty years old and represent a long-held desire to grow them. I fell under their spell as a student at Wisley, but until I had my own garden had never had a place, and consequently the time, to invest in growing them for myself. When I finally did get a large enough garden in Peckham I bought five year-old seedlings from a trusted supplier and planted them in the garden where they flowered and thrived amongst the coyote willow. I layered them with scarlet Tulipa sprengeri, clumping grasses, Crocosmia ‘Lucifer’ and evening primrose for later. I left a parent plant there when we moved in 2010, but they were the most treasured of the Ark that I brought with us to start the making of a garden here. I lifted them in autumn – when peonies should be moved, as they make their root growth when going into dormancy above ground and ahead of the fast spring emergence – the parent plants were put into a holding bed on the shady side of taller perennials whist I was planning the future garden. It is important to plant peonies at just the right depth, never too deep as this will cause a plant to be blind and not flower. For this reason I keep the mulch away from their crowns, though they do love an eiderdown of goodness to protect their tuberous roots from desiccation.

Although they probably have more sun than they would like on our south-facing slopes, our heavy ground suits them as it retains moisture. They also have the summer shade of taller perennials that grow up around them to emulate their natural woodland habitat. Right now they sit amonst shimmery Melica altissima ‘Alba’, Zizia aurea and Lunaria annua ‘Chedglow’, the lustrous, dark foliage of the Honesty throwing the luminous flowers of Molly into prominence. Veronicastrum, white willow herb and late aster will cast shadow and keep them nestled once the summer gets underway.

Collectively, my Mollies make a sizable group, the twenty year olds filling out to at least two feet across and bearing up to a dozen flowers each. I cannot help counting as each year brings more. One plant would have just as much magic, but an intergenerational mix with youngsters gives the impression that they are a colony that has increased over time. I am doing this more and more in the garden, dividing perennials but leaving some in the group to hint to the succession you’d find in the wild.

The plants that set seed remind you to revisit in the autumn to find the fat pods rupturing to reveal satin pink interiors and inky black seed, the size of peas. The seed must be sown fresh otherwise it goes into an enforced dormancy that is hard to break. The reserves in the seed are needed for the two years they take to germinate above ground The root develops in the first year to find its feet, waiting another before sending up a distinctive pinkish leaf.  You have a wait ahead of you if you start from seed, but I can assure you that the prospect of building my family of plants has never felt like an uncomfortable wait. It has been one with a reward that never dims.