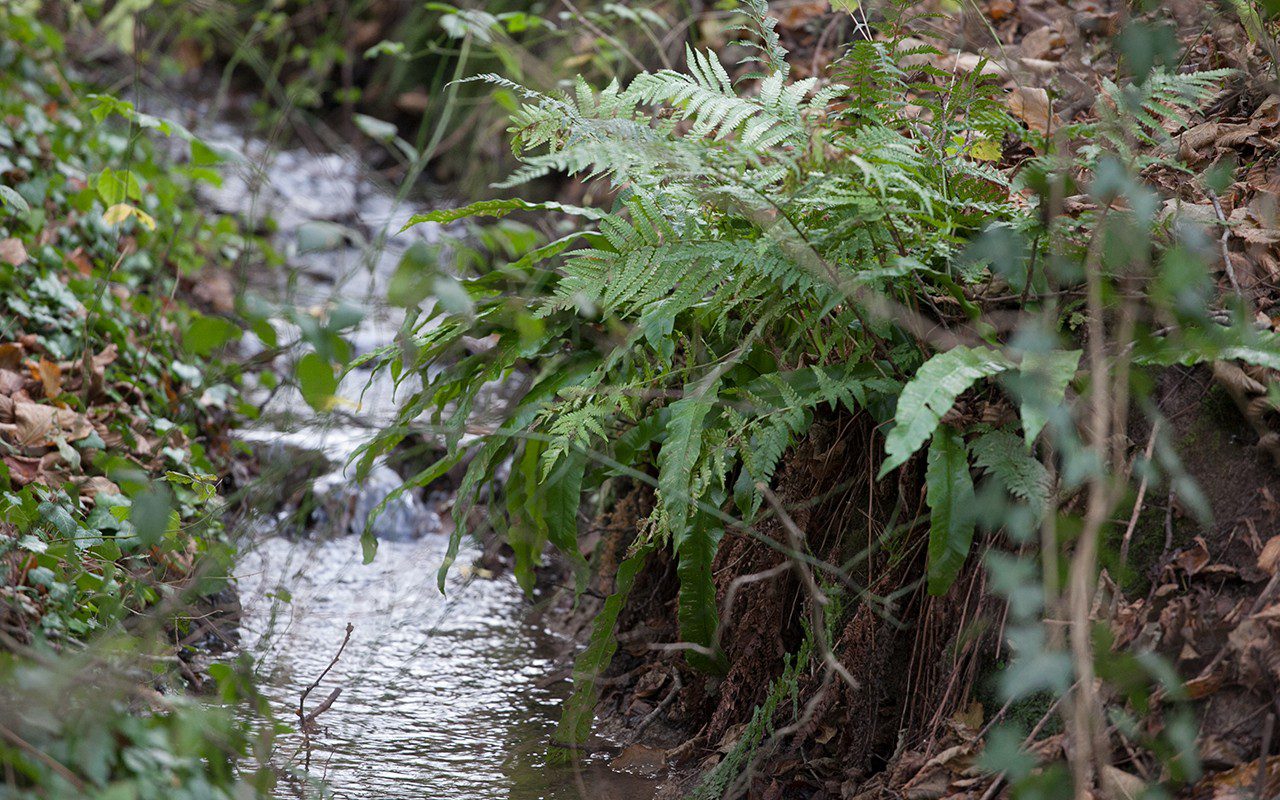 Now that the garden is resting and the woods drop back into winter nakedness we are drawn out into the landscape. Mosses greener than ever, now that the winter wet is here again, lighting up the tree trunks brilliant emerald where sunshine slides through bare branches. The north side of the trunks colonised by the green algae, Pleurococcus, act as a woodland wayfinder and, on the eldest limbs and marking their age, the colonies of polypody are once again thrown into focus.

I am happy to see them now that it is winter and enjoy the primitive feeling the ferns bring to the woods and stream edges. Higher up on the slopes, where we garden almost exclusively in sunshine, is not the place they want to be. I have planted for shade but, until I have the cover, ferns will have to have their place out of the garden season and we in turn the opportunity to visit them where they choose to be. There are three main species in the woods around us. Polypodium vulgare is perhaps the most adaptable, choosing in the main to live up in the branches, inhabiting the places where moisture is harboured. Clefts in branches, where the moss holds accumulated dampness, is where you will find them making home and, from there, they travel slowly outwards forming a matt of fibrous root that in turn collects the moss and the accumulated leaf mould so extending their reach. The finest colonies sit on the topside of the oaks that, over the years, have leaned from the slopes to strike informal bridges across the streams. Running along their branches like feathered epaulettes, the polypody strikes an exotic mood that you might more usually associate with the epiphytic bush of New Zealand or cool temperate rainforest. They are an adaptable fern, shrivelling and browning in dry summer weather to return again with the autumn wet and remain evergreen throughout the dark months. I harvested a number of plants that arrived in the wood where we logged a fallen tree by the stream and have simply laid them down in one of the few shady places up by the barn, where they have taken root. I have plans to add them to the north side of the house where I will insert them into a wall close to where I keep the epimediums so that we can enjoy them at closer quarters. A colony of Asplenium scolopendrium The hart’s tongue fern (Asplenium scolopendrium) is one of the key plants you register on the ground in the winter woodland. Clinging to the steep banks of the ditches and streams where the soil is thinnest, they make fine colonies with mature plants almost touching, but not so much that you can’t appreciate their architecture. The simplicity of their foliage, each tongue arching elegantly downward, is a feature of limestone woodland and around here it is the most prevalent fern. The Victorian pteridoligists collected the hart’s tongue ferns with great fascination, naming and selecting the occasionally crested, fasciated and undulating variants. Several are still available today and are good in the winter garden for their long season of interest. The fronds last right through the winter to the point at which the new croziers unfurl in spring. You will know exactly when to cut them and refresh the plants, as the winter foliage begins to look tired with the contrast of spring around it. The male fern (Dryopteris filix-mas) is less common here, where our soil lies heavy at the bottom of the slopes, but they do occur and I aim to introduce more when the hazel coppice matures. When I was a child, gardening in the thin, acidic woodland that faced the South Downs, Dryopteris filix-mas was a staple of the woodland and the clumps were many crowned, some as much as a metre across and aged.  Where the polypody and the hart’s tongue last the winter, the male fern tends to brown and eventually collapse as the frosts work at the growth of the previous growing season. But they are beautiful in death and more so for the contrast of old and new as the dramatic unravelling of croziers happens in the spring. Brilliantly soft and scaled dark green over light, the fronds unfurl to reach waist height before filling out and relaxing for the summer. A colony of Dryopteris filix-mas

Osmunda regalis, the royal fern, is the most spectacular of our native ferns rising up to shoulder height as the croziers reach and teeter before expanding lushly to lie back in a tropical splay of fronds.  The royal fern is now rare in the wild due to pillaging by Victorian fern-lovers but, where it does occur naturally in parts of Ireland, you find it in wet, boggy ground or on the edges of ditches.

Whereas I have not been able to include the ferns as part of the palette in the exposed new garden, I have introduced the Osmunda around the new bridge at the end of the ditch. The plants have a horticultural edge, in that they are the dark form, Osmunda regalis ‘Purpurascens’. Though not as voluminous as the regular green form, this selection is notable for the extraordinary purplish-bronze colouring of the young croziers and the tint to the unfurling leaves.  I have them in the delta of wet ground to either side of the zig-zag bridge as a companion to the ink-stained foliage of Iris x robusta ‘Dark Aura’. New life appears in April from the knobbly knuckles that have been waiting out the winter in rafts of spongy root, once prized as a growing medium by orchid growers. It is a fast and marvellous ascent when the weather turns at the other side of the winter, the new growth the colour of Victoria plums and then copper as the fronds expand. At this point a daily vigil is necessary for there is not a moment to be missed. For now, however, I am happy for the wait that is made easier by their friends in the woods.