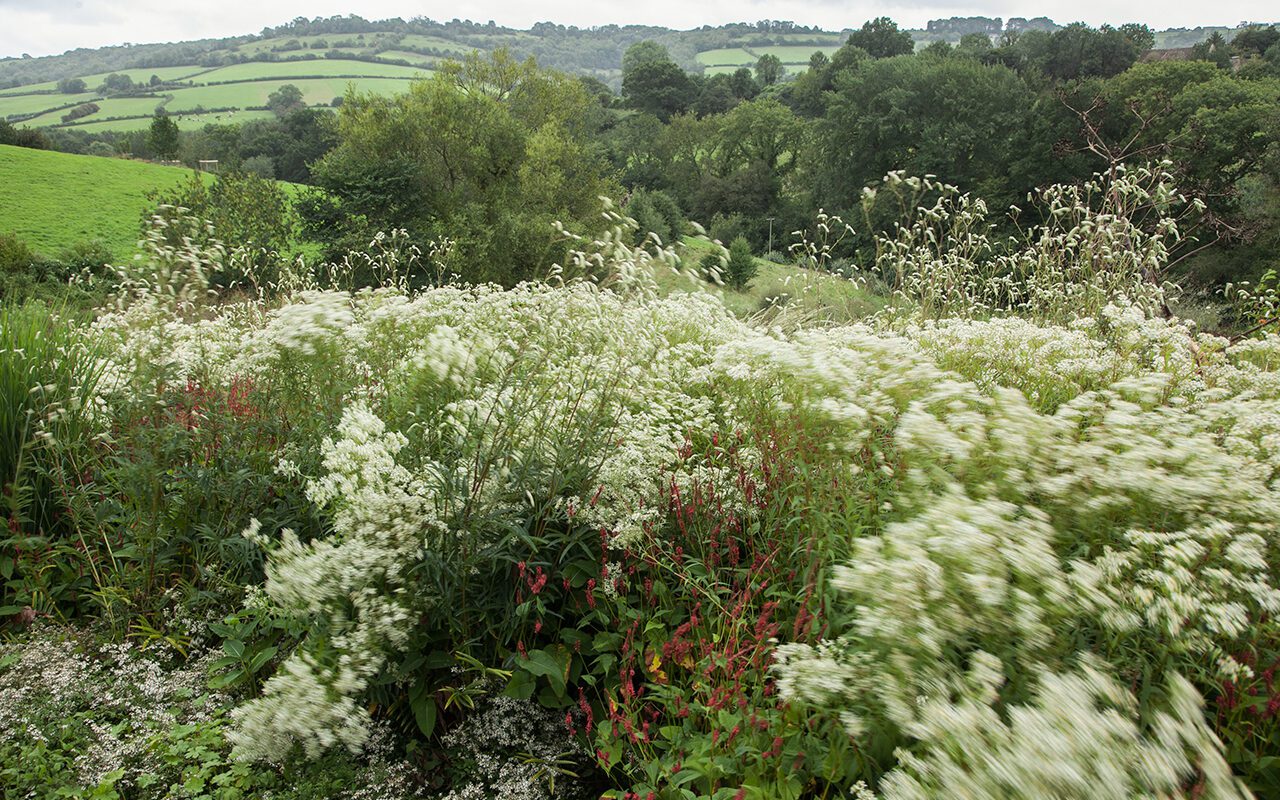 I lay awake in the night trying not to worry about the garden. The house shuddered for the second time this week as rain-laden westerlies hit the end gable. In my mind’s eye the runner beans lay toppled and our old tin barns, held together with not much more than common sense and bailer twine, were strewn about the hillside. I imagined the garden, now at its fullest, with the weight of a wet storm pushing through it, tearing indiscriminately and leaving the footprints of an invisible giant.

It is not the first time I have awoken to find things ruffled yet still standing, but where, just a week ago, we were bathed in sunshine that liberated the perfume of lavender, the storms have invited the autumn in. The month of August leans always towards the next season, the ground wet again underfoot and the associated smells of spent growth rotting. Already there are cyclamen flowering in the shadows and the first of the asters marking the tipping point and shortening evenings.

Although it is a long and plentiful season, when planning a garden I always work back from autumn so that everything leads to something celebratory. Just about now, and providing a fresh and pristine complement to the plants that have come and gone or are starting to wane, is a wave of creams and whites. I have planted several that repeat and provide this levity.

The flat-topped aster, now named Doellingeria umbellata, has considerable presence, rising up to shoulder height before giving way to creamy flower. It stands well without staking and bounces back after a storm to provide a luminous horizontal. It is teamed with Sanguisorba tenuifolia ‘Stand Up Comedian’, which rise above and pepper the air around it. Throughout the seasons I like to walk up onto the Tump and look back on the garden and, in the month of August, the doellingeria hold the upper ground and provide light that runs from here to reappear in rivulets elsewhere.

A spume of Eurybia divaricata lines the lower paths and provides a stop/start undercurrent. This is the more typical form which is brighter white and more mounding than a dark-stemmed form selected by Beth Chatto (and named after her) which I repeat along the length of the grass path at the top of the garden. Their foaming presence is rewarding on even the dullest of days and, being happy in shadow, they make a pale and light-giving understory. Both the flat-topped and wood aster keep perfect timing to ease the summer into the next season.

On the edges of the garden, and making a subliminal link to the run of the ditch with its meadowsweet, old man’s beard and white-flowered bindweed, I have grouped the creamy wormwood, Artemisia lactiflora ‘Elfenbein’ (meaning ‘ivory’). It is well placed here. Happy to take on the elements and standing tall and upright without ever needing support, it rises through the now spent Deschampsia cespitosa ‘Goldtau’ to bring a new wave of life and energy. When seen against the differing whites of two eupatorium nearby, the feathered plumes of the wormwood make interesting contrast for their creaminess. The ‘Elfenbein’ will flower for a good month whilst the shining white Anemone x hybrida ‘Honorine Jobert’ gather their strength for full blown autumn.