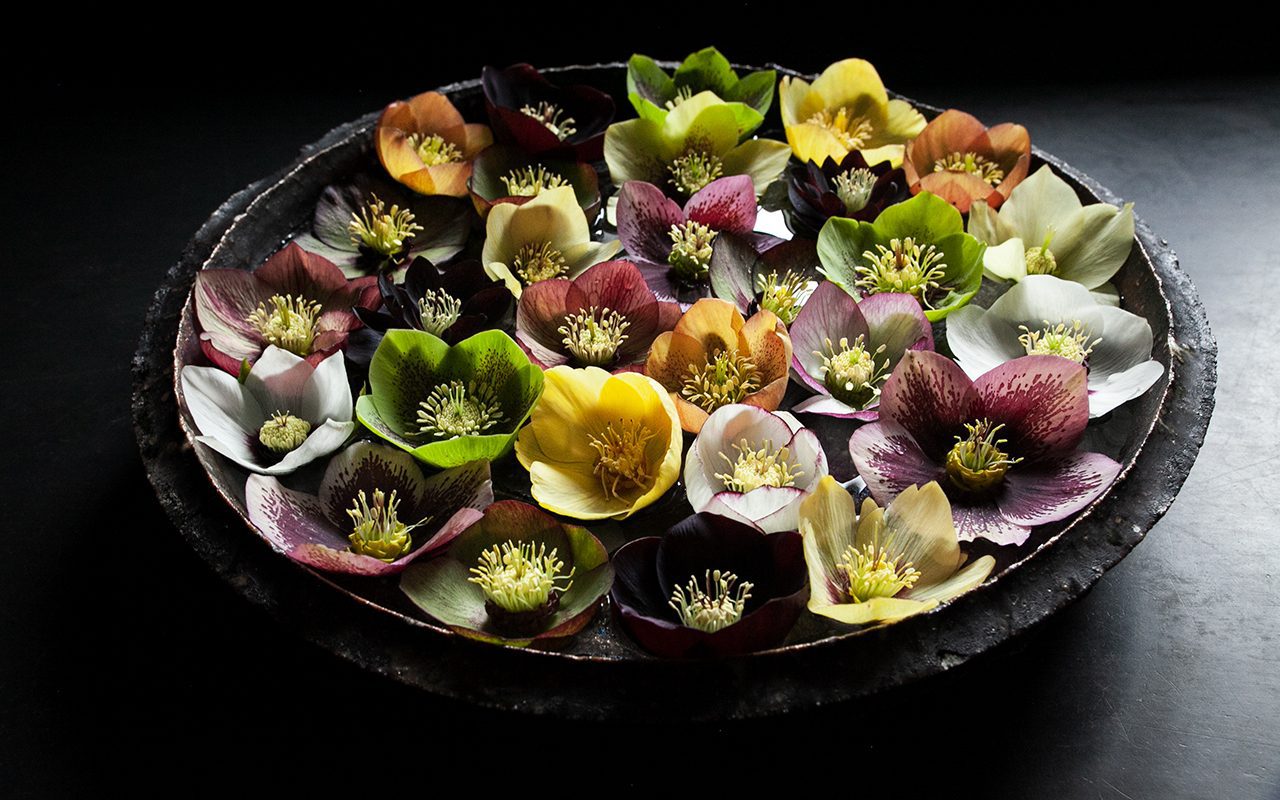 The Lenten roses were early, showing their buds prematurely at the new year as a mark of the mild winter. They have been gathering pace in these damp weeks since to arrive on cue where they should rightly be to brighten February. This is their month and their new life is my trigger to make a start clearing around them.

Revealed again, free of last year’s debris, they rise to their full potential to stand elegantly poised on slender stems. Their flowers, bowed and hooded against the elements, give little away and remain mysterious until you upturn them in your hand to glimpse the complexity of their interiors. We group them in shadowy places alongside the steps and are lucky here with our slopes, which allow you a glimpse from the underside into their secret interiors.

My childhood gardening mentor and friend, Geraldine, always had a bowlful on her kitchen table at this time of year. She had learned that, since the stems do not cut well, this is the best way to enjoy them up close, floating on water like offerings. Back when I was a child and Geraldine and I were swapping seedlings, we were quite content with what I would now see as murky pinks and impure whites. We had no idea then that Elizabeth Strangman and Helen Ballard were already selecting and refining the beginnings of the first good forms, many of which led to the choice we have today. Ashwood Nurseries have made an art of selection and are my go-to nursery for hellebores, but I am always on the look out at this time of year, because there is nothing like finding a new favourite.

As with any infatuation, I have become very particular about the forms I grow here. I favour the singles, which sit better with the naturalistic mood of the garden and look for good poise and well-proportioned flower. You know when you see it once you get your eye in.

The cool conditions that the hellebores need in summer are rare on our slopes and the pools of shadow that I am nurturing under the trees have to be rationed. The hellebores come high on the list of shade-lovers I provide for and I have grouped them according to colour, moving from tree to tree and changing the mood accordingly. Lime-green selections to throw the black forms into relief under the Hamamelis x intermedia ‘Gingerbread’, meaty reds and plums together with the bronze foliage of Viola riviniana var. purpurea beneath the medlar. Yellows completely on their own or with the green of ferns, so that their brightness shines out in the way that primroses do on a shady bank.

The whites get their own place too as they project a clean mood and are good with snowdrops and I like to see the picotee selections together so that the fineness of their markings is not lost in a crowd.  Although I am not an admirer of the double forms, particularly the pastels, which feel overbred and out of place at this time of year, I do treasure a dark plum double of good form. We have it growing on its own under the wintersweet and I like it for its ancient, medieval feeling. When afloat it looks like an exotic waterlily.

Once the hellebores begin to go to seed, I remove all but an occasional stem in each group to curb their offspring. The parent plants can live many years, decades even, and are best without the competition of juveniles, but I am keen to see, by grouping my plants carefully, if they will spawn the odd treasure. Most will be inferior to their hand-selected parents, but some may have a special something. The seedlings retain a certain charge of expectation. The excitement of a possible new addition to the spectrum.