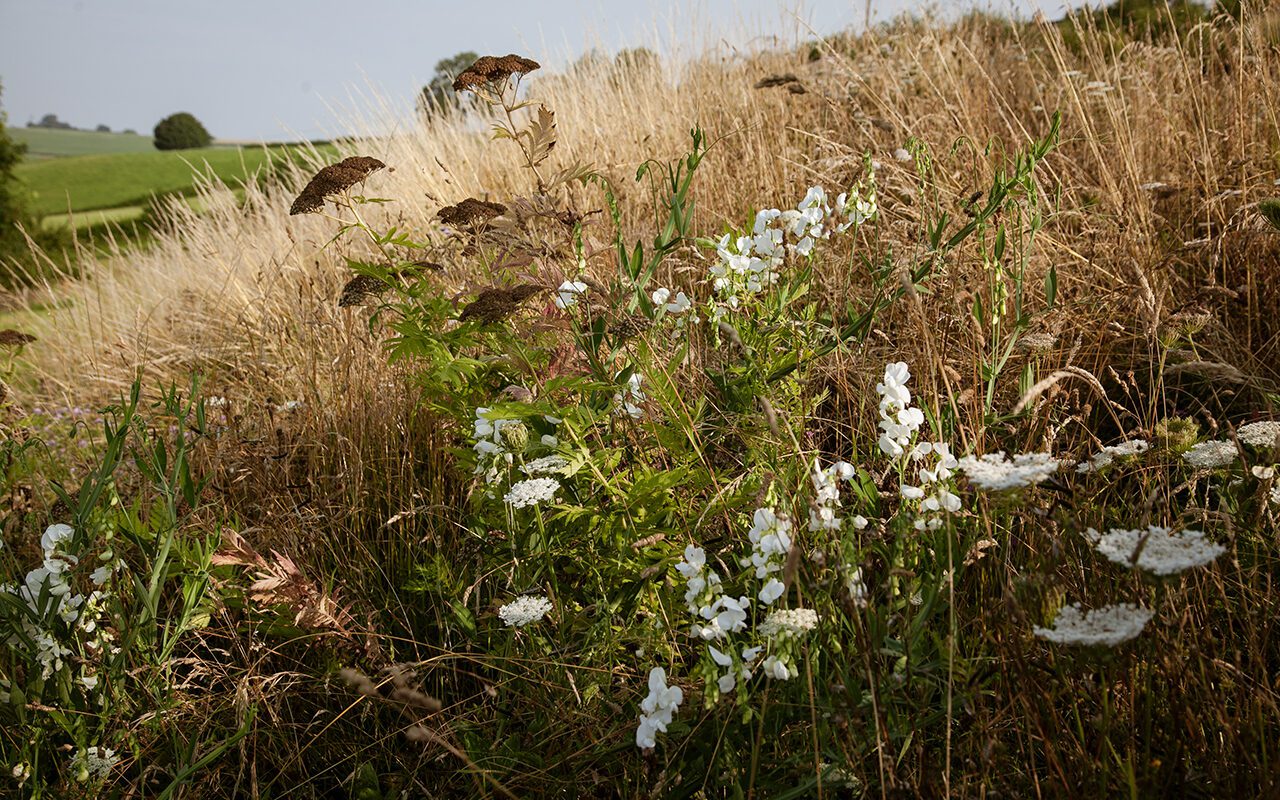 The first Cyclamen hederifolium are already in flower and letting us know that autumn isn’t far off. Although I love their coil from bare earth, their arrival always triggers a pang of melancholy. Surely it cannot already be this time and summer already waning ?

In truth I find August one of the most difficult of months and always have, time showing in the garden where you haven’t quite got it right or where you haven’t built in a degree of expectation to keep the energy up. Knowing myself, I have learned to not give the mood purchase and plan for it with an undercurrent of asters and a stride of late-flowering grasses that still have energy in them and are yet to come into their own.

Where we leave the meadows long on the banks beneath the house, they have mostly run to seed and lie akimbo after summer storms. Wild carrot, a good latecomer and a reason to leave the meadows long until the end of the month in places, offer their flat creamy heads for the wealth of life that still occupies this place. The late cut allows for the last of the scabious, the knapweed and the late-blooming wild origanum and I have added to the banks with a slow but measured introduction of everlasting peas.

Lathyrus latifolius is a long-lived perennial usually seen in a bright magenta and often taking hold on the sunny sides of railway embankments. Perhaps these plants, often seen with running asters, were originally an escapee, hurled over a fence for being too vigorous in garden company. They could just as easily have been flung over the fence naturally, their seedpods splitting on a hot day, cracking open and catapulting their contents.

I have ‘White Pearl’, a clean creamy form here and I plan for there to be a flotsam of lathyrus to sit amongst the choppy hollows of the spent meadows.  I plant twenty or so every year, which I raise from seed to extend their domain. You have to get to the seed as the pods dry and brown, but before they rupture and the seeds are jettisoned. Sown fresh they are often up in the autumn to overwinter in the frame to be the right size to plant out the following spring.

Being nitrogen fixing, the peas are happy to take to poor ground and where the company isn’t too vigorous on the dry banks they rise up and take hold as the meadows around them begin to fade. We have the narrow-leaved everlasting pea, Lathyrus sylvestris here also. The seed originally came as a gift from my friend Jane who collected it on the cliffs above Branscombe Bay in Devon. Though it is naturalised in many parts of Britain it is speculated that it wasn’t also an escapee originally. It is a pretty thing with small flowers of a dull rose-pink and growth that reminds me of a stick insect. Long, straight limbs to rise up and above the competition and tendrils that allow it to attach and suspend itself in a scaffolding of growth using nothing more than the spent stems of the grasses to provide purchase. Touch the plant and you can feel how structural its cage of growth becomes despite its delicate appearance.

I would not plant either pea in the garden for fear of being over-run, as they are more than capable of growing to 2 metres in a season. Neither have scent, but this is a small price to pay for such a welcome interlude in the high and teetering summer.