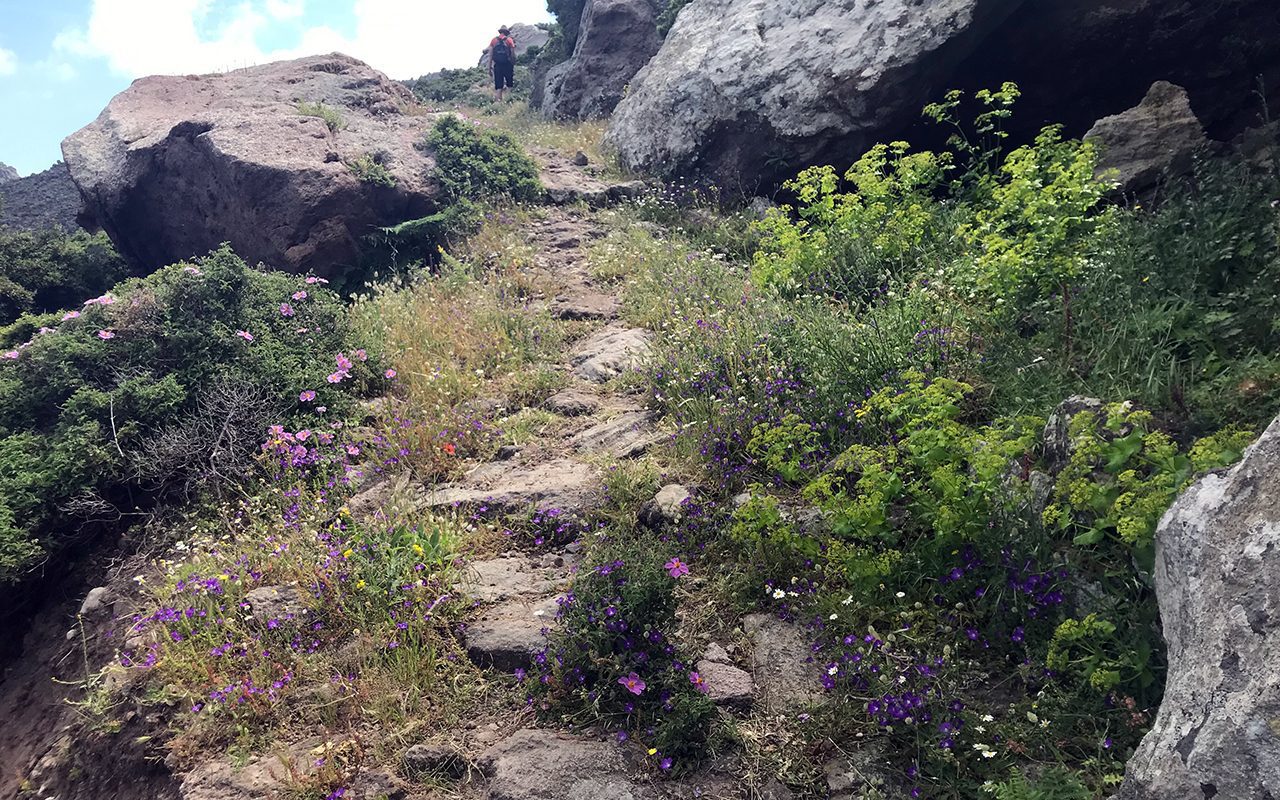 In the last week of April we returned to an island in the Dodecanese that we have been drawn back to more than once. We had been bewitched by the April wildflowers there on our first visit seven years ago, but have never managed to catch them again with life unravelling the best made plans for a spring return. The news of a wet winter in the Mediterranean and encouragement from friends on the island that the flowers had never been better cemented our plans. So, with the garden already awoken and needing attention at Hillside, we did what we could to ready things for the season and left the asparagus crop and instructions to enjoy the blossom to friends who were house and dog sitting.

As the ferry neared, the now familiar outline of the island cleared and sharpened. The last time we had seen them the ancient terraces that scaled the hillsides were browned by summer heat, but the rocky contours were now shrouded and emerald with growth.

Once on shore, the week of wonderment began immediately. Gold and white chrysanthemum (Glebionis coronaria) flurried away into the distance, scaling the rocky outcrop of the monastery as if it were whipped with seahorses. Where we had become used to the sepia September island, the colour was switched back on and everywhere. Banks of perfumed broom (Spartium junceum), chrome yellow and jostling with lilac sea stock (Matthiola sinuata), took the sunny corners on our switchback journey up and out of town. Fluttering silver-pink Convolvulus althaeoides twisted into the chainlink of the school playground, whilst scarlet poppies, cobalt cornflowers and brilliant white daisies took the rough disturbed places. Little walkways leading between the terraces of olives and figs were cushioned by azure lupins and an electric coupling of acid green smyrnium. This was our first impression I might add; the first day when your eye takes in the big picture and not so much the detail.

We were staying up and away from the town, a forty-minute walk at a regular pace along one of the narrow monopati that once were used by shepherds and farmers to tend their land. Land that became rougher and wilder and more delicate in its detail the further we walked from the managed influence of the terraces above the town.

The week we were there saw our eyes slowly tuning to a new and different way of seeing. One that was not about looking at a tended and manipulated place, but seeing a landscape that had become settled by neglect. We were surrounded by long disused terraces where the ground you could see had remained untouched for decades. It was clear that wild goats had got the upper hand, for the shrubby oaks had been goat pruned into extraordinary shapes which, with the abundance spawned from a wet winter, saw them hovering like topiaries in a sea of delicate ephemerals.

We had decided to travel light, leaving cameras behind and opening ourselves to the luxury of looking and not doing. The images we have pulled together here from our phones only touch on the magic of what we found. Miniature meadows so delicate that they were almost impossible to venture into. So delightful that we stood in each others footsteps to leave the lightest imprint possible. And the more we looked, the more finely spun the intricacy of the associations. Dancing Briza maxima, hovering over a silvered undertow of star clover (Trifolium stellatum). Pinpricks of the tiniest Silene, brilliant pink and suspended on needle thin stems. Fluttering Tuberaria guttata, a miniature yellow rock rose dotted sometimes with a dark central spot, other times simple and without.

On the old, least accessible terraces there were fleets of Easter orchids (Anacamptis sancta). The childlike excitement of the first and then so many that you were afraid to take a step forwards or backwards.

The liberation of looking and not doing is a good discipline. One that as a trained and committed gardener I find it had to make the space for. But the clarity that comes through a meditation upon natural order runs deep and resonantly. The balance of a plant that has found its niche is not to be forgotten, nor the interdependency of a community that works for negotiating each other’s company and shining for it. The legacy of just a few days will charge the coming weeks of being back to reality. To a garden that needs tending and manipulating into position, but with the knowledge of a true order refreshed and reminded.