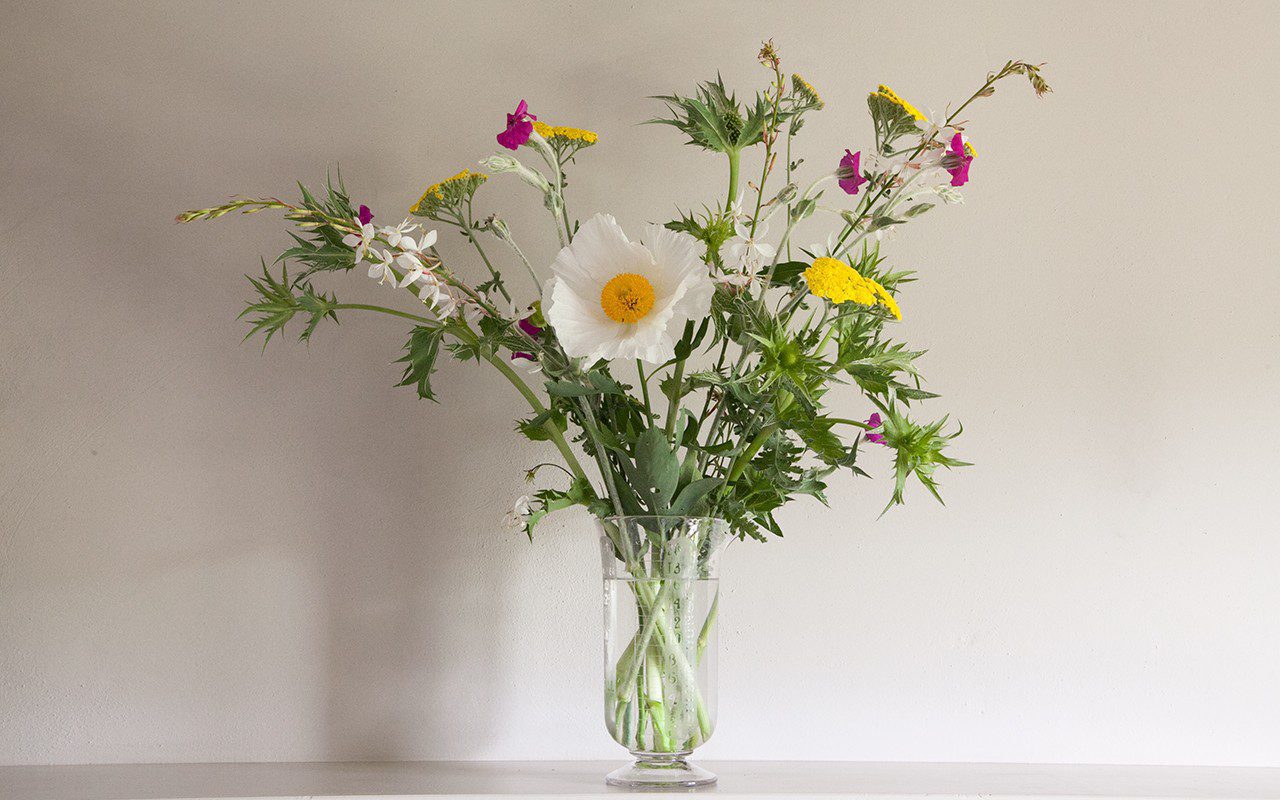 And so the balance has shifted. The energy of the race to the longest day of the year already dimming. It is a subtle change, but even now it is in evidence with the grasses going to seed in the meadows, May’s vibrant greens flattening and the first of the bindweed replacing the dogroses to light the hedgerows. The last few days of searing heat have pushed this high summer feeling still further and this bunch from the garden reflects something of the new mood.

It is with much excitement that the Romneya coulteri flowered for the first time this year, and no surprise that they chose to do so in weather that must have reminded them of home. See the Californian Tree Poppy in the southern parts of the state where it runs through the rubbly hillsides and you understand why it should be given the hottest, most free-draining position you can offer it. I have it here, facing south, at the base of the barn wall, where the soil is rarely damp for long. It is a choice position – and there are few on our hillside that offer such a baking – but it was not a difficult decision to give the space up to one of my all-time favourites.

I first saw the tree poppy growing in Brighton where it had taken over the tiny front garden of one of my father’s friends and had made the seaward-facing ground its home. Towering at eight feet or so above the pavement and all but obscuring the bay window (there was no need for curtains), from inside the house the crumpled, glistening petals were filled with summer light. The luminosity of the flowers is amplified by a yolk-yellow, globular boss of stamens which dust the petals with pollen as they flutter in the breeze. Hovering on long stalks reaching towards the sun, held amongst finely cut blue-grey foliage, they cannot help but capture all the light that is going. For me the mood they create is the epitome of summer. I have given it the space to claim this moment and have repeated it three times amongst jagged, silver cardoons and ethereal Althaea cannabina. Romneya hate disturbance, so you have to be sure you know where you want it and not succumb to the temptation of moving it, should it decide it likes you. I’ve found they are fickle and can easily succumb to verticillium wilt in our damp climate when they are young, so I usually build in loss and plant more than I need. Hence the repeat along the barn wall but, in this instance, all three plants have so far thrived, sulking a little in their first year, rising up to a metre or so, but remaining blind and without flower. This year they are looking much more like themselves and have begun to take their position. I’II expect them to attain full stature in a couple of years and we will see then if they start to run, as they can and do in search of new territory. However, they are easily curtailed as long as you slice the runners with a spade and are not tempted to pull the runner back to base and disturb the central root system. Although they will regenerate if the winter hasn’t been hard enough to floor last years growth, it is best to cut the stems hard to the base in March after the worst of the winter has run its course. New shoots are rapid and lush and altogether better looking. In the gravel, that surrounds the barns, I have been playing with a number of self-seeders to make the buildings feel like the garden has made its home there. Eryngium giganteum ‘Silver Ghost’ is one that I sowed directly from fresh seed given to me by Chris and Toby Marchant of Orchard Dene Nursery. I’d admired the plants at the nursery for their more acutely veined and crested flowers. It is showier than the species, without feeling like it has lost any charm. The common name for Eryngium giganteum, ‘Miss Willmott’s Ghost’, is attributed to Ellen Willmott, the English horticulturist, who was said to have carried seeds in her pockets at all times and distributed them in a trail throughout gardens she visited. If it finds a home that is to its liking, with plenty of sun and no competition to the basal rosette, this biennial is great for never being in the same place and for the chance happenings that come about when you let it find it’s own position. It is good here with the flutter of Gaura lindheimeri that creates a shimmering highlight of white, like the sparkle of light on water. Achillea ‘Moonshine’ is a plant that I have not grown since I was a teenager, where I had it in my yellow border. It was short-lived there in the window of light that fell between the trees in our wooded garden, but I hope to keep it longer here on our sunny hillside despite its requirement for regular division. It is dancing now amongst the contrasting magenta of Lychnis coronaria in a strong wind that has kicked up after the past week’s heat, but is all but oblivious to the buffeting. Perfectly flat heads that huddle at about knee height are the ideal receptacle to harvest the high light and long days. The colour is the brightest, most vibrant sulphur yellow and, now that I see them together in a vase, its brightness further enriches the golden boss of the Romneya to saffron. A new combination for the future, perhaps (for they would surely like the same conditions) and one that would set the tone for the height of summer that is still ahead of us.