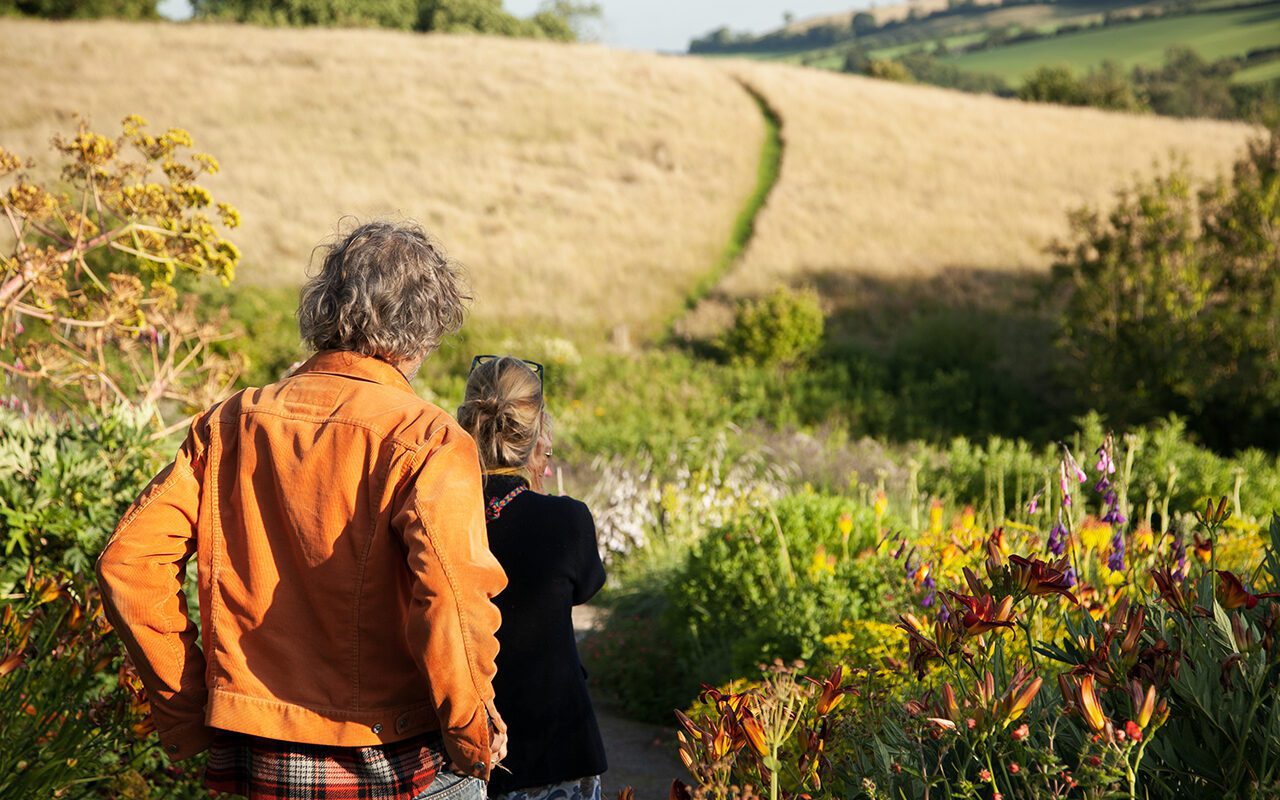 Everything changes as June tips into July. The meadows, now tawny and seeding, begin to throw their second wave of flower. Knapweeds, scabious and the bedstraws with their clean and honied perfume. The yellow rattle is rattling with seed and letting us know that it won’t be long before we get a call from the farmer who will want to cut and bale the hay before the goodness goes out of it. We walk the arc of a path mown into The Tump to make the most of their last days, the Meadow Brown butterflies lifting ahead of us as we disturb the evening.

We leave the slopes behind the house uncut until the middle of August to compensate for the July cut in the broader landscape, but there is an inevitable handover that happens once the meadows are harvested and return to grazing. It was good to have taken our time to understand these rhythms before beginning the garden proper and, subliminally, I think I’ve planned for this moment as our focus comes back to the homestead. Back to harvesting in the kitchen garden and the orchard and back to the garden as it betters in this second half of summer.

We had a visitor late this week to mark this moment. It has been a curious year for not being able to share the garden with friends, to discuss the changes and the planned for and unplanned for happenings. You see a garden in altogether another light when you are not head down or distracted by the tasks that need doing. Showing a garden is time put aside to reflect and enjoy and, like going to an exhibition with a friend, their own personal reflections can often throw another light entirely on what you think. You learn through looking together and so on Thursday evening with perfect timing the light did its thing, the clouds parting at five, just before Tania’s arrival.

The garden has gone through a shift in the last week, the reach for the sky peaking to give way to colour. The Dierama mark the balancing point perfectly, spearing upward with the lengthening light of June and arching under the weight of their own flower in the long, drawn out days. The flowering stems, are fine and pliable, the flowers held in suspense, their mobility hypnotising, bobbing and flexing and rarely still.

It is clear why they have earned the name Angel’s Fishing Rods and I planned for the Dierama to line the path edges so that you cannot help but engage with their dance. The position on the front line and in the open is ideal for them and I chose ‘Blackbird’, ‘Cosmos’ and ‘Merlin’ to enjoy the darkest selections. Choosing the dark flowered forms rather than the pinks felt like an important move as the flowering of the Dierama comes with the first wave of strong colour. The curiousness of bi-coloured Kniphofia rufa and the acid green of Euphorbia ceratocarpa are not easily paired with colour that is not definite, so I was dismayed that, when they finally came to flower, the Dieramas were not what I had planned for. Clearly seed-raised and completely variable, a number of washed-out pinks will have to be ‘moved-on,’ but there have been a couple of surprises which have reframed my original palette. And not for the worse.

Central to the whole garden and taking pride of place is what I believe to be ‘Guinevere’. We circled around her for quite some time the other evening, returning more than once to take in a plant that is completely happy in its place and well coupled in the brightest part of the garden.  Having grown Dierama before in a dense London garden, I quickly learned that they hate competition and that their spearing evergreen foliage should always have light right down to the base. I learned too that if you do get the position wrong and try to move them, they dislike the disturbance and will sulk for years or worse, dwindle away to nothing. A young plant grown into position and left to mature where it finds its feet is the surest way to happiness.

Hailing from the open meadows of South Africa, where they can and do get good summer rainfall, Dierama are happy with moisture as long as the ground doesn’t lie wet and cold in winter. That said, I have also grown them well in free draining soil and have only ever failed where they have struggled with competition, as their main considerations are light and air. Both elements that we have plentifully here so their dance is a fine one, holding the eye and our attention as we circle back into the high summer garden.